Kamala Harris closed out a full day of inauguration ceremonies by delivering a noted speech by the Lincoln Memorial Reflection Pool during the “Celebrating America” primetime special.

After a historic and eventful morning where she was sworn in as the first Black woman to hold the second highest office in America, Harris filled out the rest of the day with pomp and circumstance, eventually leading to her returning to the U.S. Capitol still marred by the violence and destruction carried out on Jan. 6.

As the Biden-Harris administration hopes to turn a new page in America’s chapter, Harris took on her first duties as President of the Senate, swearing in three newly elected Democrats: Raphael Warnock, Georgia’s first Black Senator; Jon Ossoff, the first millennial and Jewish Senator, and Alex Padilla, the first Latino to represent California in the Senate. However Harris’ absence from the Senate will be sorely felt as Padilla replaces her seat, meaning that no Black women are currently serving in the Senate.

Her first speech as Vice President she delivered a message of unification and reverence, a theme that ran throughout most of the days events. The full transcript of her speech can be found below. 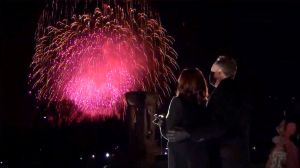 “Good evening. It is my honor to be here, to stand on the shoulders of those who came before, to speak tonight as your Vice President.”

“In many ways this moment embodies our character as a nation. It demonstrates who we are, even in dark times. We not only dream, we do. We not only see what has been, we see what can be. We shoot for the moon and then we plant our flag on it. We are bold, fearless, and ambitious. We are undaunted in our belief that we shall overcome, that we will rise up.”

“American aspiration is what drove the women of this nation throughout history to demand equal rights and the authors of the Bill of Rights to claim freedoms that had rarely been written down before. A great experiment takes great determination. The will to do the work and then the wisdom to keep refining, keep tinkering, keep perfecting.”

“The same determination is being realized in America today. I see it in the scientists who are transforming the future. I see it in the parents who are nurturing generations to come, in the innovators and the educators, in everyone everywhere who is building a better life for themselves, their families, and their communities.”

“Thank you and may God bless America.”