Baseball has its icons and its legends. There’s the Babe, there’s Willie but there’s only one “Hammerin” Hank.

Hank Aaron, a civil rights legend and the home run king of baseball, passed away on Friday (January 22) peacefully in his sleep, his daughter confirmed. He was 86.

“We are absolutely devastated by the passing of our beloved Hank,” Braves Chairman Terry McGuirk said in a statement released by the team. “He was a beacon for our organization first as a player, then with player development, and always with our community efforts.  His incredible talent and resolve helped him achieve the highest accomplishments, yet he never lost his humble nature. Henry Louis Aaron wasn’t just our icon, but one across Major League Baseball and around the world.  His success on the diamond was matched only by his business accomplishments off the field and capped by his extraordinary philanthropic efforts.

“We are heartbroken and thinking of his wife Billye and their children Gaile, Hank, Jr., Lary, Dorinda and Ceci and his grandchildren.”

Aaron was the one man Muhammad Ali said he idolized “more than myself.” Baseball’s all-time leader in runs batted in, he was born in February 1934 in Mobile, Alabama to Herbet and Estella Aaron, one of eight children. Although he tried out for the Brooklyn Dodgers in 1949, two years after Jackie Robinson broke baseball’s color barrier, he began his professional career in the Negro Leagues with the Indianapolis Clowns’ organization.

“If it hadn’t been for my brother, my uncle, sharing their love and making me realize that — although I had a dream at that time — but if I keep looking and pursue it, that I could match it,” Aaron told WSB in 2015 about his family keeping him invested in the sport.

In 1952, he signed with the Boston Braves over the New York Giants, meaning the Giants could at one point had an outfield with Aaron and another pioneer — Willie Mays.

The Braves would move to Milwaukee in 1953 and in 1954, Aaron would make the majors. He would don his iconic 44 in 1955 and would begin a career which resulted in a record 21 All-Star selections and a record 25 All-Star appearances. 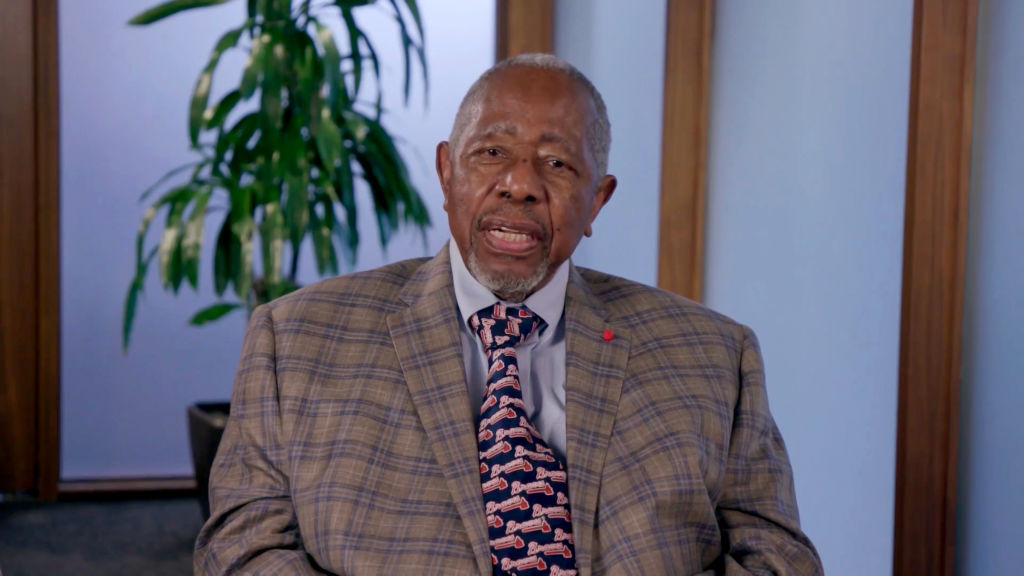 In 1956, he would win the National League battling title and his lone MVP award in 1957 after hitting .322 and finished in the top 3 in terms of home runs, batting average and runs batted in. The year would conclude with his lone World Series win as well as the Braves would beat the New York Yankees in the World Series.

In 1966, the Braves would leave Milwaukee and settle in Atlanta, where Aaron would rise to even greater stature as he chased the most mythical record in the sport, Babe Ruth’s home run crown. He would also endear himself to the civil rights movement, befriend giants such as Andrew Young and immerse himself in the struggle as Black Americans in the south continued to fight for equality.

As his career continued, so did the historic feats on the baseball diamond. He became the first player in Major League history to record 500 home runs as well as 3,000 hits. Over the course of his lengthy career, he would hit 40 or more home runs seven different times, finishing third in MVP voting six times and even set a personal best in home runs in his age 37 season with 47.

Aaron’s run towards Ruth’s record was met by hate mail and death threats, not just for him but also some covering his chase. At one point, he stated he received about 3,000 pieces of mail, most of it racist. The Atlanta-Journal Constitution held a massive space reserved for Aaron whenever he would break Ruth’s hallowed mark, and an obituary just in case someone tragically cut him down before he could do it.

April 8, 1974 is still a date which lives in baseball lore. Fourth inning, “Hammerin” Hank at the bat and future Astros broadcaster Milo Hamilton on the call.

As Aaron rounded the bases, a mob stood at home plate waiting for him, including his mother and father. A Black man in the South, from the South, was now the king.

Over time, Aaron would be charitable, not just to the future of Black baseball players but individuals across Atlanta and Georgia. He created “Chasing The Dream,” a foundation to help 755 underprivileged children get an education. He was inducted to the Baseball Hall of Fame as a first-ballot inductee in 1982.

The great Henry Louis Aaron is survived by his second wife, Billye, his four children from his first marriage (Gaile, Hankie, Lary and Dorinda), his adoption of Billye’s daughter, Ceci, and grandchildren, and great-grandchildren.