Kanye West is said to be telling friends that he and Kim Kardashian are back together — but according to reports, nobody believes it — and no one really cares at this point.

The pair performed some sort of ritual at Ye’s “Donda” listening party in Chicago on Thursday. Kim joined the rapper during his PR stunt at Soldier Field, where they held a faux wedding ceremony. The event also saw Kanye light himself on fire and ascend to the heavens.

Per Page Six, “music insiders say that West is putting on a big show of “performance art” in a bid to propel his album sales past those of his nemesis Drake,” the outlet writes.

One music insider said, “Kanye has been telling other rappers that he and Kim are back together, but everybody knows that isn’t true.

“The real story is that Kanye wants to beat Drake in record sales, and he is putting on a big show of performance art to grab all the media attention.” 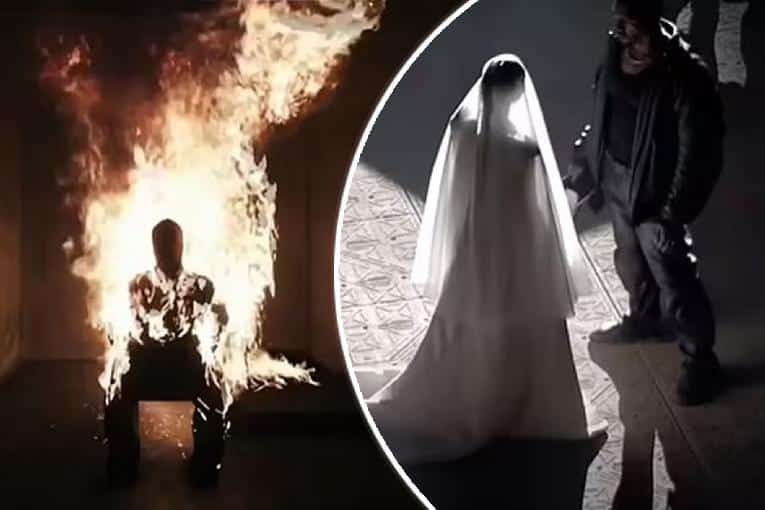 The source added of his relationship with Kim, “They weren’t talking for months after she filed for divorce, but they began talking again earlier this summer for the sake of their kids.

“Kim is a nice person – while she and Kanye are not back together – she’s happy to support him in his work and his art, she wants a good relationship with him for the sake of their children.”

According to the Page Six source, West persuaded Kardashian to partake in his “performance art.”

A second insider said, “Kanye asked Kim to be part of his performance art finale, and she was happy to help him achieve his creative vision and will always support him as an artist.

“Marriages are complicated, especially ones including four young children. Kim and Kanye have a genuine love for one another and deep history together.

“They did not speak for several months after she filed for divorce, but started speaking again earlier this summer.

“They have been working on rebuilding their friendship and have been incredibly supportive of one another both on a personal and work level, which is why she traveled for all three listening events with the kids to be there for him each time. They have also been spending time together as a family privately.”

A third source added, “They are not getting back together. The one thing they still have in common is love of the press. And of course, she will still help him make money because the money goes to their children. It’s mutually beneficial for both of them.”