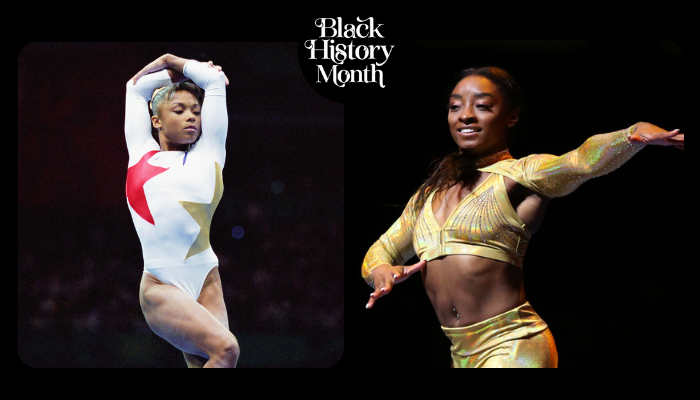 From Ancient Greece to the modern-day Olympics, gymnastics has changed in equipment, techniques and style. Along with the sports’ standard enhancements, today’s spectators have seen the evolution of talent with some of the most decorated African American gymnasts to perform. Those watching now would say, hands down, Simone Biles takes the cake as the best. But the first Black female ever to win an individual Olympic medal in the sport was Dominique Dawes.

Dawes was a force to be reckoned with in gymnastics. Her flawless routines earned her four Olympic medals and 15 national championships in her career. In 1988 Dawes became the first African American to make the national women’s team. Then she joined the 1992 U.S. Olympic team, which won bronze in Barcelona.

Later in 1994, Dawes was at the peak of her game. She earned first place in every competition category at the 1994 national championship event. Then in 1996, Dawes made a name for herself. At the Atlanta Olympics, “Awesome Dawesome” literally made history again. Dawes won an individual bronze medal in the floor exercises—the first African American to earn an individual Olympic medal in women’s gymnastics. She held the honor of being the first black woman to dominate the sport for others to follow.

“I just have to say Simone Biles is truly my little hero; she is amazing… And I would never think that a female or a male gymnast would be doing the spectacular gymnastics that she is doing today.” – Dawes (The Undefeated; 2016)

I’m not the next Usain Bolt or Michael Phelps – I’m the first Simone Biles.”

The world first took note of Biles in 2013. At just 16-years-old she won two World Championship gold medals, followed by four Worlds golds in 2014 and another four in 2015.

At the 2016 Rio Olympics, Biles had reached supreme levels. She won gold in the all-around, team, vault and floor, and bronze on the beam.

Five years later, at the Tokyo Olympics, Biles was heroically applauded for her strength, but it wasn’t for a floor routine, vault or the uneven bars. Biles put her mental health first. She withdrew from the women’s team finals and all individual finals except one event to focus on her mental well-being.

Still, Biles finished with an individual bronze medal on the balance beam and silver with her team. In her career, she’s earned seven gold medals, which ties the record for the most Olympic medals won by a U.S. gymnast. Biles, however, is the most decorated gymnast in world championships history.

Forget the gold medals, GIVE THIS WOMAN A CROWN

@Simone_Biles makes history (again) as the first woman to land a triple double in competition on floor!

Both Dawes and Biles are in an exclusive legendary category of Olympians of their time.

Their dominance in the sport will live on for the next young black gymnast to come. Dawes, 2012 Olympic gold medalist Gabby Douglas and Biles showed there is a lane for African American women in gymnastics.

Now a mom of four, Dawes has opened her gym in Maryland. According to her website, she focuses on helping kids become better gymnasts and people. As for Biles, the Texan is hesitant to say if the 2020 Olympics was her finale. In an interview with NBC’s TODAY, Biles said that she’s not deciding her Olympic future just yet. Biles said she’s “leaving the door open” for a potential return in the 2024 Paris Olympics.

SEE ALSO: The History of Black Women in Gymnastics

All Hail: The Black Olympians That Made History In Rio