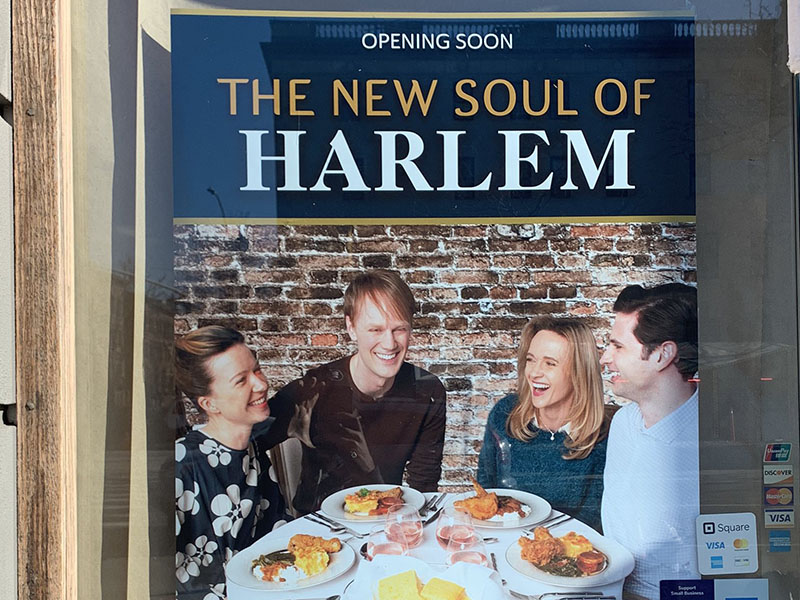 The Harlem community in New York City has long been synonymous with “Black America” despite its increasing gentrification of the area in recent years.

The historically Black and brown neighborhoods of New York City are no strangers to gentrification. Still, some people in Harlem — a community that’s been all but synonymous with Black people — were caught off-guard this week when they saw a poster advertising the impending arrival of a new restaurant called Chalmette Fusion Bistro.

The poster showed four young white people enjoying a meal at the eatery under a placard that said “The New Soul of Harlem” was “opening soon.” The smiles on the faces of the restaurant’s patrons not only suggested an obliviousness to the decided lack of diversity in a community known for multi-culturalism but they also presented a glaring contrast to two words hovering above their heads: “new soul.”

The questions came fast and furious after a photo of the poster was tweeted Wednesday afternoon. The since-deleted tweet said the poster was displayed on the corner of 139th street and Adam Clayton Powell Boulevard — just across the street from the historic Striver’s Row neighborhood — and was accompanied by a hashtag in all caps: “#DISRESEPCTFUL.”

Again, white people living in and visiting Harlem aren’t new. Neither is the idea of white-owned restaurants or restaurants frequented by white people. But amid a national racial reckoning and push for diversity and inclusion, the poster came across as tone-deaf at best and offensive at worst.

However, a closer examination showed that the poster achieved the outrage that it was apparently — because it isn’t real. Chalmette Fusion Bistro is actually a fictional restaurant destined for the big or small screen. It all turned out to be one big nothing burger — kind of.

“This fake movie poster in the doorway of Ponty Bistro in Harlem at the corner of 139th Street got people upset today,” tweeted Harlem Bespoke, an organization that blogs about all-things Harlem. “This is apparently part of a film set since the restaurant stated they were closed this week for Hollywood stuff.”

This fake movie poster in the doorway of Ponty Bistro in Harlem at the corner of 139th Street got people upset today. This is apparently part of a film set since the restaurant stated they were closed this week for Hollywood stuff. #chalmetteharlem #chalmettenyc #harlembespoke pic.twitter.com/Ww74gI9Rll

A quick visit to Ponty Bistro’s Instagram showed the restaurant was closing Wednesday, Thursday and Friday “due to a TV/film shoot.”

There was no reference to the poster, but the disclosure may have prompted a huge, collective sigh from native Harlemites who have seen the steady whitening of their community over the last couple of decades.

The next logical question is who is behind the production?

After learning the poster is fake, it was reminiscent of a skit from the “Chappelle Show” or “SNL” or some other sketch comedy.

However, gentrification is no laughing matter — especially to those who are displaced because of it. Affordable housing is becoming increasingly rare in Harlem, which started being populated with Black people in the 1900s after a plan for upper-class white people to live there didn’t work out. More than 100 years later, the reverse is happening.

Harlem Hat Shop Thrives In The Face Of Gentrification

previousThis is how experts say we keep it from becoming reality